The winner of the 2017 Doris Lessing Society graduate student essay contest has been announced! See this page for more information. 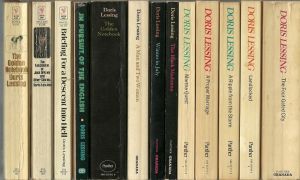 The winner of the 2016 Doris Lessing Society graduate student essay contest has been announced! See this page for the news.

And the winner is… Kerry Myler!

Kerry Myler is a lecturer in English at Newman University College, Birmingham. Her PhD examined Doris Lessing’s engagement with R. D. Laing and she is currently reworking this into a monograph on Lessing, the anti-psychiatry movement and gendered embodiment. Kerry is an executive member of the Contemporary Women’s Writing Association.

This paper reads narratives of motherhood in Lessing’s The Four-Gated City (1969) in terms of R. D. Laing’s The Politics of Experience (1967).  I argue that Lessing uses Laing’s work to rethink discourses of motherhood and madness. These are particularly important because of their fundamental role in maintaining the social order. Discourses of mothering are concerned with the social inheritance of ways of being (that is, ways of ensuring adequate adaption to and acceptance of a modern “mad” world); discourses of madness are concerned with regulating and policing intelligible ways of being (that is, excluding or reabsorbing those who have failed to adapt and accept this “mad” world). The Four-Gated City represents madness and mothering as intimately bound up with one another and the text radically reassesses the “nature” of both in order to imagine a new and better future for humanity. However, unlike Laing, Lessing cannot imagine these changes taking place within existing social structures. The Four-Gated City demonstrates that Laing’s inattention to matters of gendered embodiment, including his conceptualising of the mad as “gender neutral”, limits the usefulness of his theories for the madwoman. In Lessing’s novel the potential of humanity is repeatedly shown to be realised only when the existing social order, including the sex/gender system, is evaded and, ultimately, destroyed.

And the winner is…

Many thanks to the students and recent graduates who entered our Undergraduate and Graduate Student Essay Contests. The winners will be announced at the Annual General Meeting of the Doris Lessing Society at the Modern Languages Convention in Boston in January 2013.